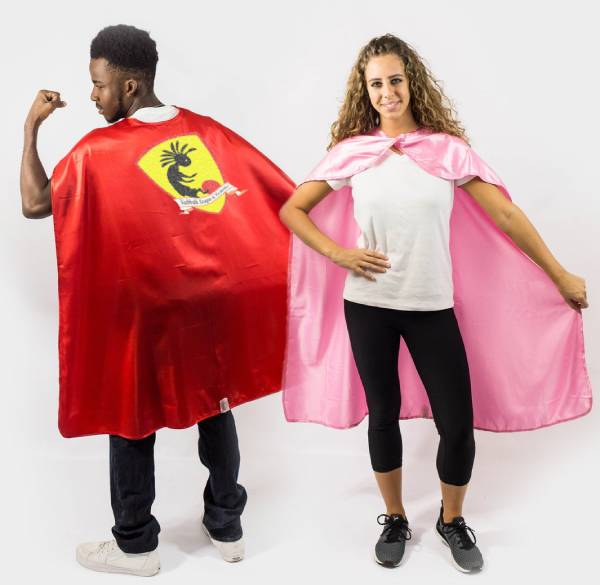 Over the past few years we’ve noticed that it’s a little confusing to determine who the Team Captain is on game days - especially since as everyone is all in the same t-shirt.
So, in an effort to help referees differentiate the game-day captains from the other players, we have a new plan to help clear this up.
For all of 2021, captains will now be re-branded as “Team Kape-tains”.

Team Kape-tains will be required to wear a Kape (Cape) during all pre-game and in-game activities. You might be wondering, "Why not call just them Team Cape-tains?". Well, we’re playing kickball, and that's starts with a “K”, and kickball is awesome, so why not?!? Also, because #Branding.
All Team Kape-tains will have the option of purchasing the official “KLOR Kape”. The official KLOR Kape will be listed in the KLOR Store for $10 and can be pre-ordered beginning today for pick-up with your team t-shirts in a currently limited but vast variety of colors.

Here are some of those options:

For those who choose not to order a KLOR Kape, we are certainly allowing the use of Custom Kapes for Kape-tains; who can create and design their own. Making your own Kape will allow Kape-tains to bedazzle, tie-dye, or beautify their Kape in whichever way they see fit. We figure that this will also be an excellent use of any leftover t-shirts they may have; however a KLOR Kape made out of a KLOR shirt cannot be substituted for use with usual t-shirt rules for playoffs/championships. Example: No going shirtless, and wearing a Kape made from a team shirt, and giving the Kape-tain’s shirt to a sub; that’s not gonna fly. Yes, pun intended.
All custom KLOR Kapes must adhere to a specific basic design:
Kape-tains who are worried about a thrown ball hitting all the extra flowy Kape material and getting them out, are certainly permitted to tuck their cape into their shorts/pants, but only after they get to or pass first base; as having a flowing cape on when kicking the ball looks hecka rad. So, any Kape-tain who tucks in their Kape during the kicking process will count as an automatic out. #Sorry #NotSorry #HeckaRadKicks4Lyfe

Teams that do not wish to staff an on-duty Team Kape-tain, will begin their game with a 2-run deficit (i.e. your opponent will start the game winning 2-0). Any double absentee Kape-tain games will start the game in inning 2 (loss of one inning) and with a beginning score of 2-2. This is for both Classic and Vintage, so don't forget your KLOR Kape or those Runs Allowed (RA) might bite ya in the booty later; whether you can boot the ball or not. #KickingBuns

Kape-tains who participate in game Challenges will also be required to don their Kape as well. #NoKapeNoKompete
We realize that this could get confusing if a team does do a superhero themed game night, so do your best to have the Kape-tain identify themselves to the Referee early on.
At the end of 2021, we'll evaluate and possibly make it a permanent staple of the league. Click here to see the full variety of Official KLOR Kapes in the KLOR Store.
Share This Posting